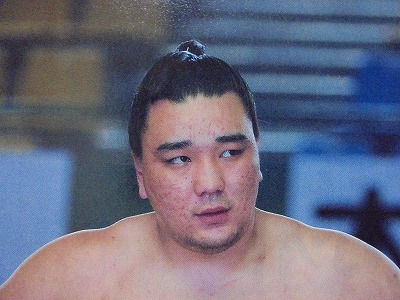 Some types of kanji for animals had been seen as part of shikona especially before Mongolian rikishi appeared. In those days, the number of such kanji was smaller than those for natural products and phenomena. With the recently increased number of rikishi from Mongolia, however, more kanji for animals have been used as part of shikona especially for them. Let’s look at differences in life environment between Japan and Mongolia. Japan is a relatively small sea-surrounded country and has lots of mountains. Japan also has four seasons. These things are all closely connected with Japanese daily life. On the other hand, Mongolia is blessed with a grand expanse of Mother Land where people see more often animals in wild. So, wild animals are more easily associated with Mongolia than natural products and phenomena are. With this impression in mind, sumo school (stable) masters/trainers (Oyakata ) name their Mongolian rikishi after wild animals.

Peng is legendary gigantic bird appeared in classic writings by Zhuangzi. Peng is a symbol of young hopefuls who will make a great success and become great personalities in later years. “鵬” is a famous name since this kanji was used as part of the shikona of “大鵬” (Tai-Hou), a historically splendid Yokozuna who marked as many as totally 32 victories in Professional Sumo Competitions. Now “鵬” is a symbol of greatness and strength. So, not only disciples of “大鵬” but also many other rikishi use this kanji as part of their own shikona after the great Yokozuna.

Dragon is a legendary gigantic animal which appeared in classic writings by Zhuangzi, and also an imperial symbol. In Professional Sumo, Dragon is considered to be one of the four Gods and protect the east. You see a blue drape hanging down from the roof structure over the dohyo (sumo ring) in the northern east. This blue-colored drape stands for Dragon.

Eagle is the strongest among all the birds inhabiting in Japan. This raptor characteristically has big wings and flies very fast. In connection with its advantages, rangy and agile rikishi often used this kanji as part of their shikona before. Nowadays, Mongolian rikishi use this kanji which sounds fit to the image of Mongolia blessed with the great expanse of the Mother Nature and wild animals.

A horse runs very fast. However, many of horses previously used in Japan were dobbin and used for faming. Dobbin is hardworking, but a short-legged and slow runner. Therefore, rikishi hadn’t liked to use this kanji as part of their shikona before Mongolian rikishi appeared in the history of Professional Sumo. In recently years, however, this kanji is seen as part of shikona of Mongolian rikishi. Different from dobbin in Japan, horses in Mongolia runs very fast, powerful and so must be stylish.